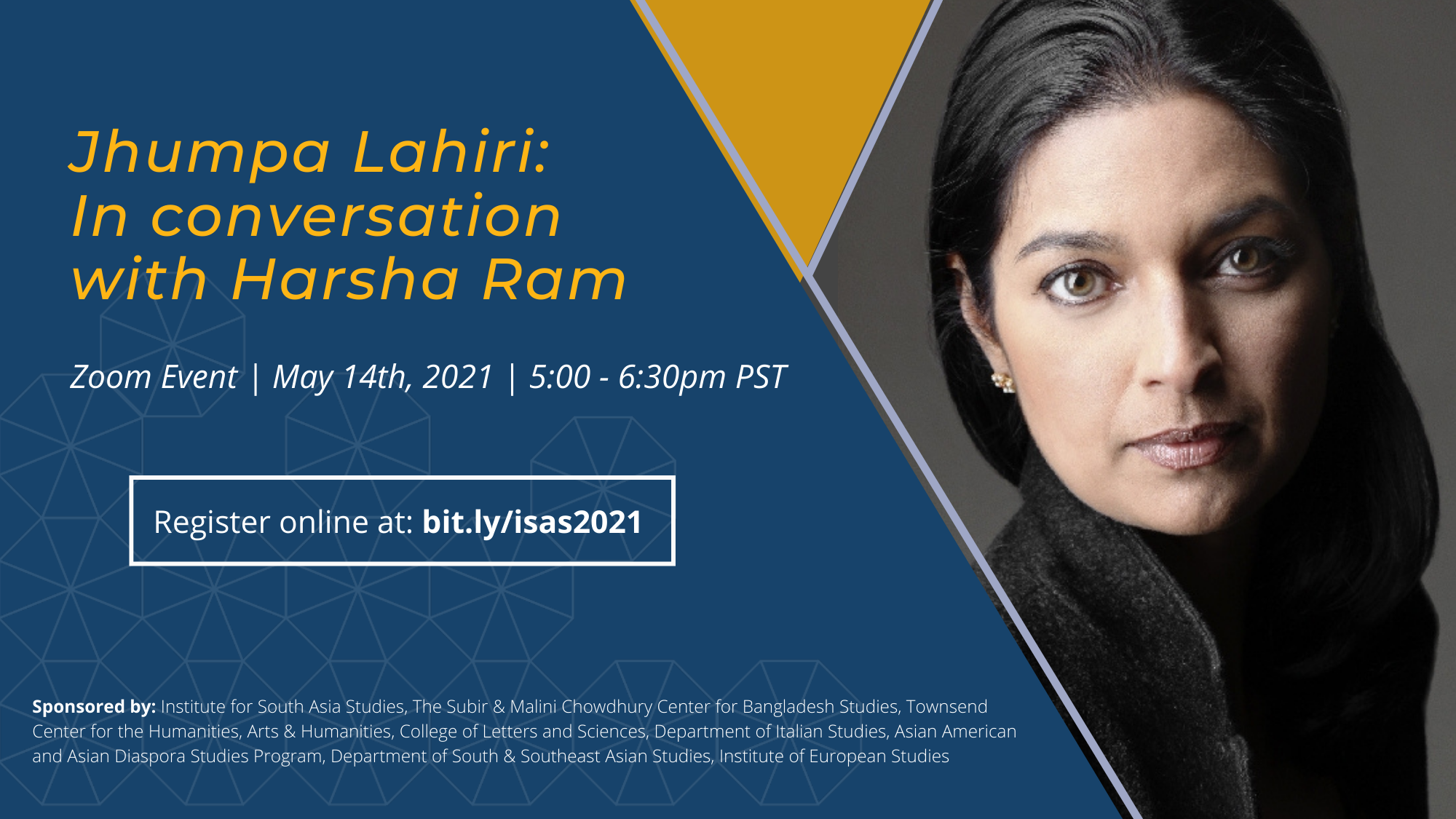 Harsha Ram, Associate Professor in the Departments of Comparative Literature and of Slavic Languages and Literatures, UC Berkeley

The Institute for South Asia Studies, the Subir & Malini Chowdhury Center for Bangladesh Studies, the Doreen B. Townsend Center for the Humanities, and Dean’s Office: Arts and Humanities at UC Berkeley are delighted to invite you to a conversation with Pulitzer Prize-winning author of Interpreter of Maladies & The Namesake, Jhumpa Lahiri.
_________________

Jhumpa Lahiri received the Pulitzer Prize in 2000 for Interpreter of Maladies, her debut story collection that explores issues of love and identity among immigrants and cultural transplants. With a compelling, universal fluency, Lahiri portrays the practical and emotional adversities of her diverse characters in elegant and direct prose. Whether describing hardships of a lonely Indian wife adapting to life in the United States or illuminating the secret pain of a young couple as they discuss their betrayals during a series of electrical blackouts, Lahiri’s bittersweet stories avoid sentimentality without abandoning compassion.

Jhumpa Lahiri’s novel The Namesake was published in the fall of 2003 to great acclaim. The Namesake expands on the perplexities of the immigrant experience and the search for identity. A film version of The Namesake (directed by Mira Nair) was released in 2007. Lahiri’s book of short stories, Unaccustomed Earth, received the 2008 Frank O’Connor International Short Story Award (the world’s largest prize for a short story collection) and was a finalist for the Story Prize. She contributed the essay on Rhode Island in the 2008 book State by State: A Panoramic Portrait of America. Her book, The Lowland, won the DSC award for South Asian fiction, and was a finalist for both the Man Booker prize and the National Book Award in fiction. Her first book written in Italian, In Altre Parole, later published in English as In Other Words, explores the often emotionally fraught links between identity and language. Her nonfiction also includes The Clothing of Books which was originally published in Italy as Il vestito dei libri. She has translated two books by Domenico Starnone; Ties, and Trick. She recently edited and partly translated The Penguin Book of Italian Short Stories. In 2021 she will publish her first collection of poems in Italian Il quaderno di Nerina (Guanda, 2021). Her first full-length self-translation is her forthcoming novel, Whereabouts (Knopf, May 04, 2021). Originally written in Italian it was published as Dove Mi Trovo in 2018.

Born in London, Lahiri moved to Rhode Island as a young child with her Bengali parents. Although they have lived in the United States for more than thirty years, Lahiri observes that her parents retain “a sense of emotional exile” and Lahiri herself grew up with “conflicting expectations…to be Indian by Indians and American by Americans.” Lahiri’s abilities to convey the oldest cultural conflicts in the most immediate fashion and to achieve the voices of many different characters are among the unique qualities that have captured the attention of a wide audience. She is a graduate of Barnard College and has a Ph.D in Renaissance Studies from Boston University.

In 2015, Jhumpa Lahiri was awarded the prestigious National Humanities Medal by the NEH at the White House. As well as the Pulitzer Prize, Lahiri has also won the PEN/Hemingway Award, an O. Henry Prize (for the short story “Interpreter of Maladies”), the Addison Metcalf Award from the American Academy of Arts and Letters, the Vallombrosa Von Rezzori Prize, the Asian American Literary Award, and the 2017 PEN/Malamud Award for Excellence in the Short Story. Lahiri was also granted a Guggenheim Fellowship in 2002 and an National Endowment for the Arts Fellowship in 2006. In September 2015 Jhumpa Lahiri joined the Lewis Center for the Art’s Program in Creative Writing faculty at Princeton University as Professor of Creative Writing. In 2019 she was named the director of Princeton University’s Program in Creative Writing. She was named Commander of the Italian Republic in 2019 by President Sergio Mattarella.

Jhumpa Lahiri divides her time between Princeton and Rome.

The event is FREE and OPEN to the public.