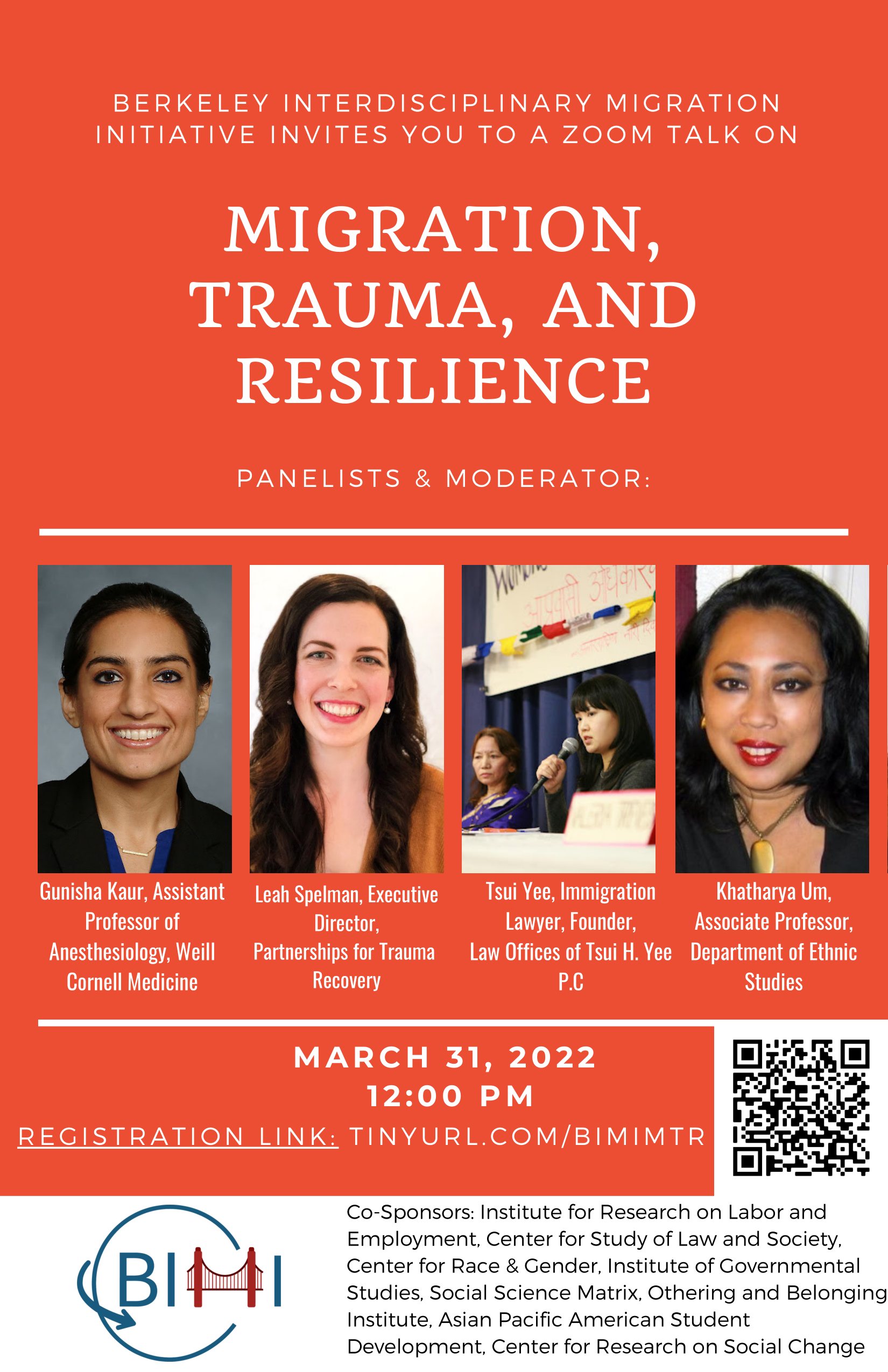 Berkeley Interdisciplinary Migration Initiative invites you to a zoom talk on Migration, Trauma, and Resilience on March 31, 2022 at 12:00 pm.

Migrants face trauma before, during, and after migration. The degree of the trauma may vary depending on the type and journey undertaken to reach the final destination, but it is present. Berkeley Interdisciplinary Migration Initiative presents a talk with Ms. Tsui Yee, leading immigration lawyer, Dr. Gunisha Kaur, Anesthesiologist and human rights researcher, and Ms. Leah Spelman, Executive Director at the Partnerships for Trauma Recovery to discuss with moderator Prof. Khatharya Um of Ethnic Studies, what is the extent of trauma and how it manifests itself in the lives of migrants as they navigate their new realities. The talk will spotlight the need to study,research, and alleviate trauma in social, economic, political, and legal framework.

Tsui Yee– Tsui H. Yee is the founder of Law Offices of Tsui H. Yee P.C., and has been practicing immigration law since 1999.  She represents clients in family- and employment-based petitions and applications; removal (deportation) defense; asylum; and other immigration matters. Ms. Yee graduated from the University of California at Los Angeles School of Law and received her Bachelor of Arts degree in Political Science from Tufts University.  She is admitted to practice law in the State of New York; the Second Circuit Court of Appeals; and the U.S. District Courts for the Southern and Eastern Districts of New York. Since 2016, Tsui has been selected to New York Metro Super Lawyers in the field of immigration law. She is a member of the New York City Bar Association, the American Immigration Lawyers Association, the Federal Bar Association, the Asian American Bar Association of New York, and the New York Inn of Court.

Gunisha Kaur -Gunisha Kaur is an Assistant Professor of Anesthesiology, the Founding Director of the Human Rights Impact Lab, and Co-Medical Director of the Weill Cornell Center for Human Rights. Dr. Kaur has dedicated her career as a physician-scientist to advancing the health of forcibly displaced individuals such as refugees and asylum seekers. She has used her extensive background in neuroscience research as an analytical framework to pioneer the study of human rights through scientific methodology. Her research has been supported by several funders including the National Institutes of Health, the Foundation for Anesthesia Education and Research, and Cornell University. Dr. Kaur’s academic writing on forcibly displaced populations has been published by the highest impact medical journals including The New England Journal of Medicine and The Lancet. She has translated her medical and scientific expertise in mainstream outlets including Time, CNN, and NBC News. She earned her B.S. from Cornell University in 2006, graduated from Weill Cornell Medical College in 2010, and completed her Anesthesiology Residency training at Weill Cornell Medical College/New York Presbyterian Hospital in 2014. She earned a Master’s Degree in Medical Anthropology from Harvard University in 2015.​

Leah Spelman – Leah Spelman serves as the Executive Director of Partnerships for Trauma Recovery (PTR), a Berkeley-based nonprofit providing mental health care and case management services to refugees, asylum seekers, and other international survivors of human rights abuses. Prior to joining PTR, Ms. Spelman was the Chief Operating Officer for Days for Girls International, a Seattle-based nonprofit focused on women’s health. Prior to Days for Girls, Ms. Spelman lived in Jordan, conducting research under a Fulbright Grant when Syrian refugees first began entering the country in large waves. Ms. Spelman has an MPH in Global Health from the University of Washington, with a focus on global mental health and culturally-aware approaches to trauma care. She holds a BA in International Affairs with a concentration in Middle East Studies from George Washington University, and speaks Arabic, Spanish, and French.

Moderator: Khatharya Um – Professor Khatharya Um is Associate Professor of Asian American and Asian Diaspora Studies in the Department of Ethnic Studies, and Associate Dean for Diversity, Equity and Inclusion at the University of California, Berkeley. Professor Um has received numerous awards for her community leadership and service, including congressional recognitions from Congresswoman Barbara Lee and Congresswoman Anna Eshoo. She is the first Cambodian American woman to receive a Ph.D.