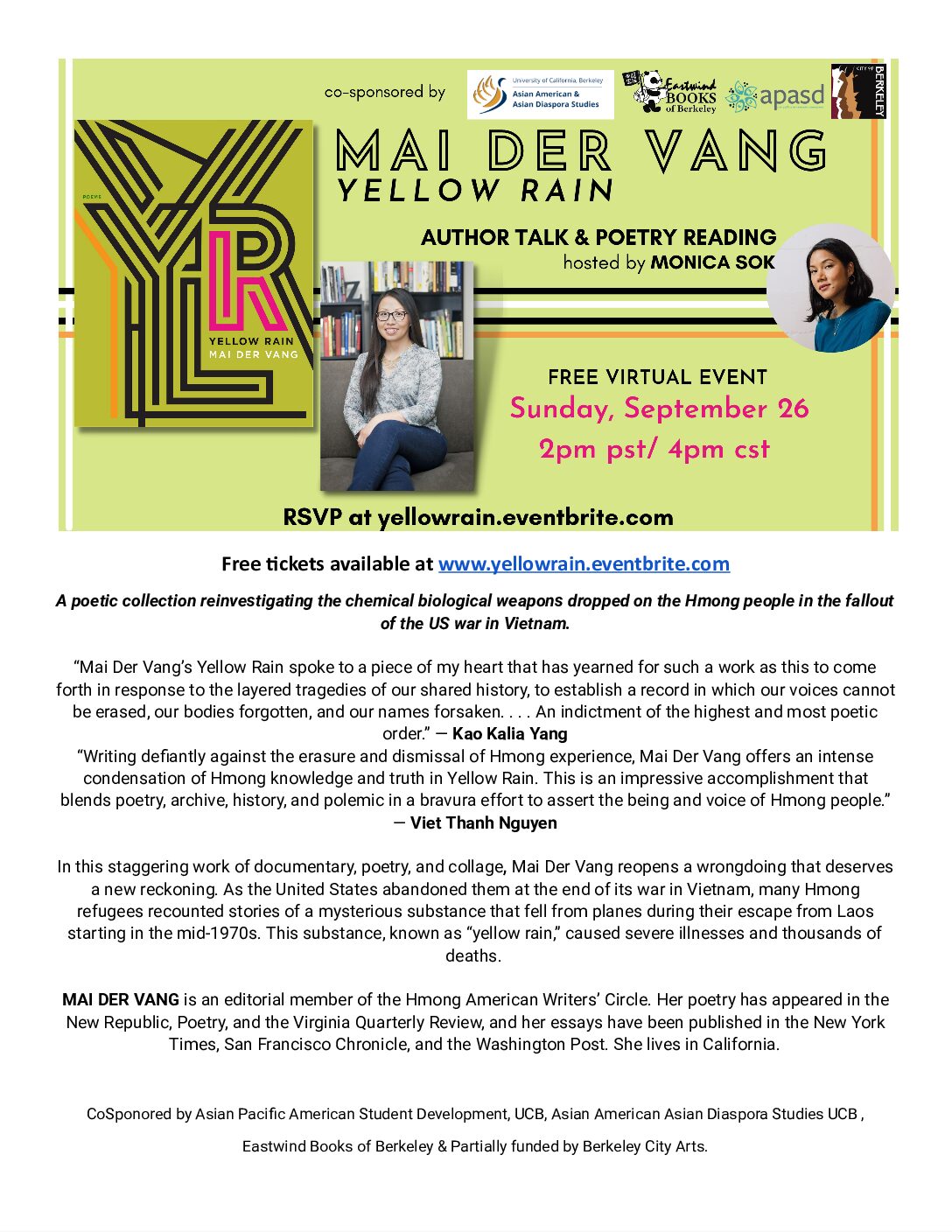 A reinvestigation of chemical biological weapons dropped on the Hmong people in the fallout of the US war in Vietnam.

“Mai Der Vang’s Yellow Rain spoke to a piece of my heart that has yearned for such a work as this to come forth in response to the layered tragedies of our shared history, to establish a record in which our voices cannot be erased, our bodies forgotten, and our names forsaken. . . . An indictment of the highest and most poetic order.” —Kao Kalia Yang

“Mai Der Vang intensifies and innovates documentary poetics in Yellow Rain. It confronts empire’s crimes against humanity and the interlocking power of science and the military-industrial complex. Yellow Rain is a magnificent textual revolt against historical amnesia.”—Don Mee Choi

“Writing defiantly against the erasure and dismissal of Hmong experience, Mai Der Vang offers an intense condensation of Hmong knowledge and truth in Yellow Rain. This is an impressive accomplishment that blends poetry, archive, history, and polemic in a bravura effort to assert the being and voice of Hmong people.” —Viet Thanh Nguyen

In this staggering work of documentary, poetry, and collage, Mai Der Vang reopens a wrongdoing that deserves a new reckoning. As the United States abandoned them at the end of its war in Vietnam, many Hmong refugees recounted stories of a mysterious substance that fell from planes during their escape from Laos starting in the mid-1970s. This substance, known as “yellow rain,” caused severe illnesses and thousands of deaths. These reports prompted an investigation into allegations that a chemical biological weapon had been used against the Hmong in breach of international treaties. A Cold War scandal erupted, wrapped in partisan debate around chemical arms development versus control. And then, to the world’s astonishment, American scientists argued that yellow rain was the feces of honeybees defecating en masse—still held as the widely accepted explanation. The truth of what happened to the Hmong, to those who experienced and suffered yellow rain, has been ignored and discredited.

Integrating archival research and declassified documents, Yellow Rain calls out the erasure of a history, the silencing of a people who at the time lacked the capacity and resources to defend and represent themselves. In poems that sing and lament, that contend and question, Vang restores a vital narrative in danger of being lost, and brilliantly explores what it means to have access to the truth and how marginalized groups are often forbidden that access.

MAI DER VANG is an editorial member of the Hmong American Writers’ Circle. Her poetry has appeared in the New Republic, Poetry, and the Virginia Quarterly Review, and her essays have been published in the New York Times, San Francisco Chronicle, and the Washington Post. Her debut collection, Afterland, received the Walt Whitman Award from the Academy of American Poets. She lives in California.

MONICA SOK‘s debut poetry collection A Nail in the Evening Hangs On uses poetry to reshape a family’s memory about the Khmer Rouge regime — memory that is both real and imagined — according to a child of refugees. Driven by myth-making and fables, the book seeks to reclaim the Cambodian narrative with tenderness and an imagination that moves towards wholeness and possibility.